To maintain current rates of utilization, Delaware will need an additional 177 primary care physicians by 2030, which is a 27% increase compared to the state’s current 635 primary care physician workforce. The graph below projects that Delware's demand is above the overall demand in the U.S. but below the demand within the southern states.

Pressures from a growing, aging, and an increasingly insured population create the growing demand for primary care physicians in Delaware.

The graph below shows the increased demand for primary care physicians in Delaware by 2030 is due to three factors: an aging population, a growing population, and the pressures felt from an increasing number of insured Americans due to the Affordable Care Act. 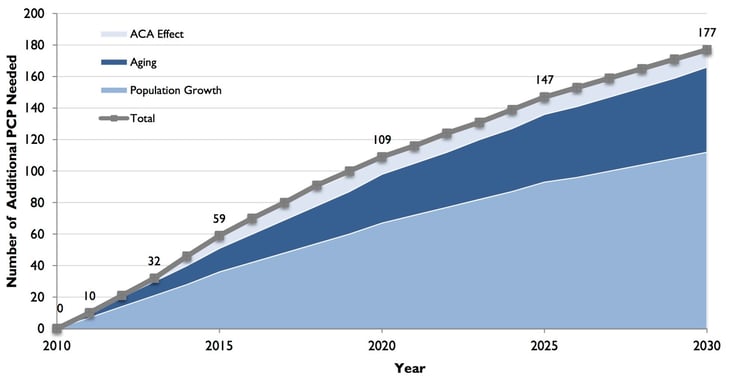 Why is the physician supply outpacing demand? Find out here.

To solve this primary care crisis in the United States, doctors and patients are switching to an alternative model that completely eliminates insurance and therefore, all of the problems associated with the traditional primary care payment model. This new model is called direct primary care.

In this alternative model, patients pay their doctor directly, rather than through their insurance company. This means that patients pay a pre-defined monthly fee directly to their doctor instead of paying insurance premiums and co-pays. Basically, direct primary care cuts out the middle man and ultimately saves patients money. The cost of care is reduced to the point where the average American can once again afford to see a physician on a regular basis. Insurance isn’t necessary within this relationship because the care is affordable. Actually, keeping insurance out is what makes this relationship functional and affordable.

The doctor shortage is real – it’s significant – and it’s particularly serious for the kind of medical care that our aging population is going to need.

Is Direct Primary Care Right For You?

For those interested, the doctors at Total Access Medical will meet with you for free to discuss more about direct primary care and it’s many benefits.