Can Seniors Benefit From Virtual Reality? 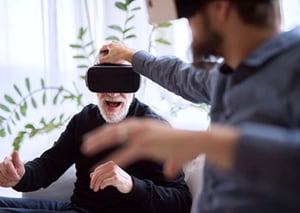 The senior population often yearn for mental stimulation and they are eager to learn, explore and interact. This need for stimulation is likely a result of the physical and cognitive decline associated with aging.

VR games are entertaining, but they also serve an important function: stimulating our minds with new activities to improve memory. Here's how VR can can be used to benefit the elder population:

Decline in memory and spatial reasoning can often be early symptoms of Alzheimer’s or dementia. Doctors are able to detect these issues through VR navigation games where players orient themselves in new environments.

This type of test is difficult to execute in a traditional clinical setting.

VR can help train motor and cognitive skills and it can improve balance, gait, and neural connections. One study shows that playing a 3D video game designed to train multi-tasking abilities enhanced sustained attention and working memory of seniors. In conclusion, custom-designed video games can be used to assess cognitive abilities across the lifespan and serve as a powerful tool for cognitive enhancement.