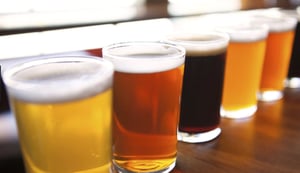 The negative health consequences of alcohol are numerous. From more alarming outcomes such as cancer to more "cosmetic" inconveniences such as premature signs of aging, alcoholic beverages seem to hide a range of toxic effects that can slowly take a toll on our health.

Most of us probably think that unless someone has alcohol dependency or drinks heavily, they're out of alcohol's negative reach. But more and more studies are pointing to a different conclusion.

A recent study suggested that just one drink can shorten our lifespan. The jury's still out on whether drinking in moderation is good for you, but some studies have suggested that even light drinkers are at risk of cancer due to their alcohol intake.

A new study, which was published in the journal JMIR Mental Health, adds to these dire prospects.

The fact that the study used real-life information makes it unique. Researchers examined data from 4,098 men and women aged between 18 and 65, whose heart rate variability (HRV) was recorded in uncontrolled, real-world conditions using a special device. HRV measures the variations in time between heartbeats, variations which are regulated by the autonomic nervous system.

Noteworthy: Staying Healthy As You Age

The scientists had access to sleep HRV recordings from a minimum of 2 nights: one where the participants had consumed alcohol and one where they hadn't.

Alcohol intake was broken down into "low," "moderate," and "high," — categories that were calculated based on the participants' body weight.

The Dietary Guidelines for Americans define moderate drinking as up to one drink per day for women, and up to two daily drinks for men.

The study revealed that alcohol reduced the restorative quality of sleep. Specifically, a low alcohol intake decreased the physiological recovery that sleep normally provides by 9.3%.

Even as little as one drink was shown to impair sleep quality. Moderate alcohol consumption lowered restorative sleep quality by 24%, and high alcohol intake by as much as 39.2%.

These results were similar for men and women, and alcohol consumption affected sedentary and active people alike.

Interestingly, the harmful effects of alcohol were more pronounced among young people compared with seniors.

However, the evidence shows that despite being young and active you're still susceptible to the negative effects of alcohol on recovery when you are asleep.