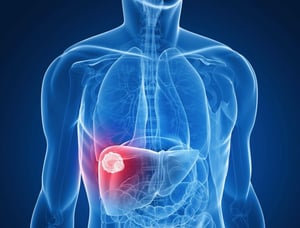 Death rates from liver cancer increased 43% for American adults from 2000 to 2016, according to a report released Tuesday by the US Centers for Disease Control and Prevention's National Center for Health Statistics. The increase comes even as mortality for all cancers combined has declined.

Liver cancer death rates increased for both men and women 25 and older, as well as white, black and Hispanic people. Only Asians and Pacific Islanders saw a decrease in mortality from liver cancer.
The rise in mortality doesn't mean that liver cancer is deadlier than before, according to Dr. Jiaquan Xu, the author of the report; the 10-year survival rate for liver cancer didn't change much. Rather, the increase in mortality means more people are developing liver cancer.
More than 70% of liver cancers are caused by underlying liver disease, which has risk factors such as obesity, smoking, excess alcohol consumption, and hepatitis B and C infection. The main reason for the increase in liver cancer incidence and death rate in the US is the increase in the prevalence of excess body weight and hepatitis C virus infection in baby boomers.
Up until 1992, blood transfusions and organ transplants were not screened for hepatitis C. According to the CDC, this was once a common means of hepatitis C transmission.
It is often years before a person living with hepatitis C develops liver cancer, which would account for an increase in incidence of the cancer among older individuals who received blood transfusions and organs before 1992. Liver cancer mortality was greatest in those 75 and older, followed by those 65 to 74 and 55 to 64, according to the new report.
Lifestyle changes can decrease the risk of developing liver cancer. Some of these liver cancer risk factors like obesity, diabetes and excess consumption of alcohol, those things can be prevented.
Mortality By Gender
There's a longstanding recognition that men have a greater risk of liver cancer than women, although the reasons aren't clear. Some risk factors for liver cancer, such as drug use and obesity, tend to affect more men than women. Still, men and women saw similar increases in mortality -- 43% for men and 40% for women -- from 2000 to 2016. Once you have liver cancer, whether you're a man or women, your cancer survival rate is the same.
Survival rates depend on how early the cancer is caught -- according to the American Cancer Society, localized liver cancer has a five-year survival rate of 31%; regional liver cancer that has spread to nearby organ has a survival rate of 11%; and distant liver cancer, which has spread further in the body, has a 3% survival rate.
Mortality By Race
White adults had the lowest death rate from liver cancer of any racial group throughout the 16 years analyzed. While there is no evidence that race influences the biology of cancer, nonwhite individuals are more likely to receive inadequate or unequal access to care, which might account for their overall increased mortality from liver cancer. The only races whose mortality decreased were Asians and Pacific Islanders, which might be due to increased vigilance and screening for these races, since the incidence of liver cancer is known to be higher in these populations.