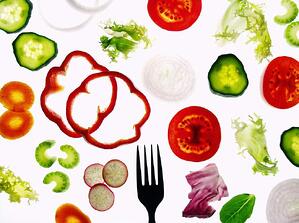 Adhering to a diverse diet and consuming "foods in moderation" may be enough to slash cancer survivors' death risk by 65 percent.

A growing body of evidence is suggesting that diets influence the outlook of cancer survivors.

And, a meta-analysis of existing studies refers to the Western diet as "detrimental" for those who were diagnosed with breast cancer.

But a lot of these studies focus on certain foods that should be avoided or consumed by people who have had specific forms of cancer, whereas the Dietary Guidelines for Americans, for example, emphasize the importance of a high-quality "total diet" for optimal health in the general population.

So, researchers set out to investigate the benefits of an overall healthful diet for cancer survivors.

Researchers examined data on almost 1,200 cancer survivors who were enrolled in the National Health and Nutrition Examination Survey between 1988 and 1994.

Using the Healthy Eating Index score, the researchers measured the quality of these participants' diets.

A high score on the index corresponds to a diverse diet — that is, a diet rich in fruits, vegetables, and whole grains, as well as proteins, dairy, saturated fat, cholesterol, and sodium — all in moderate amounts, as defined by the Dietary Guidelines for Americans.

The researchers also examined the National Center for Health Statistics Linked Mortality Files, revealing that during a 17-year-long follow-up period, 607 study participants who had been diagnosed with cancer had died.

Although the researchers also studied food groups separately, such as salt or red meat, it was the overall diet that predicted a low risk of mortality.

Finally, the researchers also studied subgroups of people diagnosed with breast cancer or skin cancer, in addition to survivors of all cancers.

"The findings were consistent among these subgroups," explained the researchers, "that eating an overall healthy diet was associated with decreased mortality risk, whether it is mortality from any cause or cancer-specific mortality."

Although the study was purely observational and does not prove causality, the authors recommend that people follow the guidelines outlined by initiatives such as My Plate, the Dietary Guidelines for Americans 2015–2020, or Healthy People 2020.