What Are The Effects Of Sleep Deprivation? 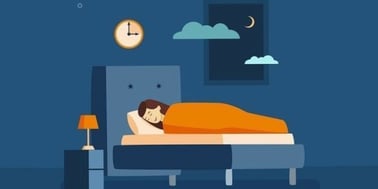 If you're not getting enough sleep, it could have significant impact on your day-to-day and long-term health. From mental health to how our bodies store fat, recent research is adding to evidence that illustrates how much sleep deprivation can, and is, impacting health.

It’s been well-documented that getting adequate sleep helps strengthen our immune system and is associated with a decreased risk of cardiovascular and metabolic diseases, including obesity and type 2 diabetes.

One such way sleep deprivation hurts us is that it makes us feel less full even after eating a high-fat dinner.

The study, recently published in the Journal of Lipid Research, addressed how getting 5 hours of sleep a night, 4 days a week — followed by one 10-hour night of “recovery sleep” — affected 15 healthy men in their 20s.

Specifically, how it affected their postprandial lipemia, or the rise of triglyceride-rich lipoproteins that’s been linked to the formation of clogging and dangerous fatty plaques in the arteries. What the researchers found wasn’t good.

The lipids weren’t evaporating — they were being stored. Experts are still unable to pinpoint exactly why getting enough sleep is a problem, but they say stress from work not only impacts our sleep, but that lack of sleep makes our jobs more stressful.

Another recent study by Ball State University researchers found that nearly a third of working Americans report getting 7 hours of sleep or less, a trend they say is getting worse by the year.

The results were nearly identical for men and women, but some races and professions are getting hit harder than others.

The U.S. is currently witnessing high rates of chronic diseases across all ages, and many of these diseases could be related to sleep problems.

The researchers at Ball State found African Americans and multi-racial adults saw the largest increases, with each group having more than 45% of study participants reporting that they don’t get enough sleep. It adds to the racial disparitiesTrusted Source ingrained in U.S. healthcare.

Between 45% - 50% of people working in the healthcare field and the police and military reported being sleep deprived.

41% of people in transport, material moving, and production occupations reported the same thing.

That’s of particular concern considering these high-stress jobs often result in life-or-death decisions made in windows lasting only seconds — from avoiding accidents on the road to de-escalating a potentially fatal encounter.

Not only is inadequate sleep associated with mild to severe physical and mental health problems, injury, loss of productivity, and premature mortality, but there’s no definitively known cause found for why fewer people are getting the sleep they need.

The workplace is changing as Americans work longer hours, and there is greater access and use of technology and electronic devices, which tend to keep people up at night. Add to this the progressive escalation in workplace stress in the United States and the rising prevalence of multiple chronic conditions could be related to short sleep duration in working American adults.

Moreover, poor sleep also affects our mood. Over a long period of time, more hours of lost rest increase a person’s risk of accidents and an overall poor quality of life. Physically that can translate to not only obesity and diabetes, but also high blood pressure, a suppressed immune system, low sex drive, and an overall chance of death apart from any other medical condition.

Mentally that can lead to anxiety, depression, paranoia, and even hallucinations.

In children, a lack of sleep can lead to hyperactivity, which could be confused as attention deficit hyperactivity disorder (ADHD).

In conclusion, getting a restful nights sleep is crucial to overall happiness, health and productivity. Poor sleep contributes to serious health consequences, including physical diseases like obesity, diabetes, high blood pressure, and heart disease, as well as mental health disorders like depression and anxiety.